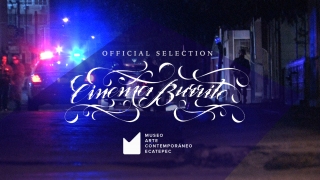 El Flaco continues its run as an Official Selection premiering at the Cinema Burrito Film Festival in Ecatepec, Mexico, this Saturday, June 17, 2017. El Flaco will screen out in the open along with ten other short films showcasing the border community of Juarez, Mexico, and El Paso, Texas. The festival will take place at Museo Arte Contemporáneo Ecatepec, a museum nearby Mexico City with no walls, with the goal of building projects to stimulate actions and reflections from the cause and effects that take place in Ecatepec.

El Flaco is a documentary short that tells the story of a male prostitute on his late-20s that makes a living in the dark and gloomy streets of downtown Juarez, Mexico.

Juarez, Mexico has been known internationally as the eye of the hurricane due to the historic high wave of violence, crime against women, and the war among the drug cartels. Unfortunately, these events have become iconic to the city and have been portrayed in this negative light in various forms of media for years. Juarez might not be perfect and it will continue to seek social justice and economic growth like any other developing city in Mexico, but I know their people, I’ve worked with them, I’ve eaten burritos with them and they are not drug dealers or ‘bad hombres.’
KRISSTIAN DE LARA

El Flaco will be screening at Cinema Burrito, La generación que nunca fue:
Museo Arte Contemporáneo Ecatepec – Saturday June 17, 2017 from 7:30pm to 9pm in Ecatepec, Mexico.
The screening will take place at Plaza Juárez, on the corner of 5 de mayo in Santa Clara Coatitla.
Visit the Facebook event here. | Watch the trailer below or click here