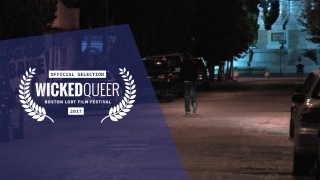 El Flaco premieres as an Official Selection of Wicked Queer, an LGBT Film Festival in Boston, Massachusetts, on Sunday, April 9, 2017. El Flaco will screen under the Sex Work Shorts category in The Paramount Center at Emerson College. It will be part of the efforts to spotlight the lives of sex workers that affect everyone, insiders and outsiders, fracturing the most basic human rights.

Krisstian states during an interview for Kn2s Productions that he is excited to bring El Flaco‘s story into the limelight especially now that the border between the United States and Mexico is making such negative news at the international level. He concludes,

The El Flaco’s documentary doesn’t portray a criminal but instead a victim of a bigger picture. It shows that Mexico and the United States have an unbreakable connection and we need each other to combat poverty and human rights.
KRISSTIAN DE LARA

El Flaco will be screening at the 2017 Wicked Queer Film Festival:
The Paramount Center at Emerson College – Sunday April 9th, 2017 at 3:30pm in Boston, MA.
El Flaco will be part of the Sex Work Shorts Category:
Click here to get your tickets | Watch the trailer below or click here