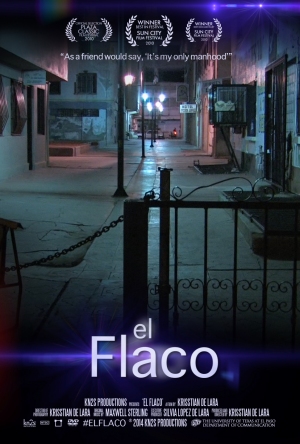 The promotional poster for Krisstian de Lara’s documentary short film, El Flaco, gets released this month. El Flaco tells the real life story of a male Mexican prostitute residing in Juarez, Mexico at the border with El Paso, Texas. El Flaco serves clients from both countries and pays for police protection to be able work the downtown streets of Juarez. The image featured on the poster showcases the location where El Flaco works: a dark, gloomy and mysterious alley.

“The atmosphere in El Flaco is mysterious and dark. Therefore it was important to reflect such hostile environment in the film’s poster.” Krisstian de Lara says in an online interview through Kn2s Productions via kn2s.com. El Flaco has won festivals such as the Sun City Film Festival and awards such as Best in Festival and Best Documentary Film. Additionally, it has been officially selected for the Southeastern Film Festival premiering in Nashville, Tennessee this fall. Krisstian concludes,

This movie poster embodies the crude reality of El Flaco’s world and the possible reality of many male prostitutes in Mexico.
KRISSTIAN DE LARA

Krisstian de Lara would like to give special thanks to the Sun City Festival for the recognition and the The University of Texas at El Paso for supporting stories such as El Flaco‘s.