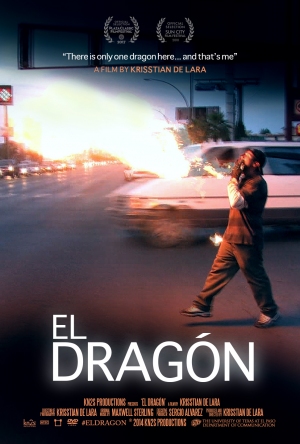 The promotional poster for Krisstian de Lara’s documentary short film, El Dragón, gets released this month. El Dragón tells the story of Jorge, a fire breather, making a living working on the dangerous streets of Ciudad Juarez, Mexico. The movie poster showcases Jorge spitting fire at a traffic light as a van passes by parallel to him. The piece reflects the spirit of Juarenses through movement, traffic and fire.

“His need to move across the city to make a living is represented by movement. Dodging cars that zoom terrifyingly close to him on a daily basis is portrayed by traffic. Spitting his life away with diesel for a few pesos is symbolized in fire. That’s the spirit of not only Jorge’s but of many Juarenses that take pride in laboring an honest living.” Krisstian de Lara states in an online interview through Kn2s Productions via kn2s.com. El Dragón was officially selected to Sun City Film Festival and it will be screening at Plaza Classic Film Festival in El Paso, Texas this August. Krisstian concludes by discussing how Jorge avoided things like drug trafficking in lieu of a way of living that, despite the toll it takes on his health, is an honest way of earning money.

That’s the spirit of Juarenses, people who want to work and make an honest living. Like Jorge, there’s many Mexicans who want to see their country better and they know it starts with themselves. Despite the fact that Jorge is an elementary dropout, he has the values we wish many people with education or power should have, and that admirable.KRISSTIAN DE LARA

El Dragón premieres at Plaza Classic Film Festival under the Local Flavor showcase this Saturday, August 14th, 2017 at 333 N. Oregon, Foundation Room at 8pm in El Paso, Texas. You can read the full interview with Krisstian here: Director speaks about the spirit of Juarenses in El Dragon’s movie poster.