Building and creating a world through music video is one of the biggest ways to dream. Bringing ideas alive for the audience to view through the director’s eyes is such a unique experience not found anywhere else.  Krisstian de Lara has always been intrigued by how the chemistry between music and video come together to create one solid symphony. 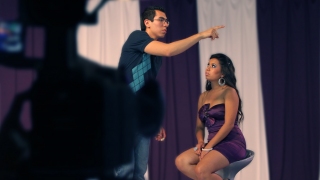 Krisstian directing Tania on set at The University of Texas at El Paso studios.

Krisstian has a sharp eye for emerging talent and is always on the look out for it. Tania performed in various events in Texas and Mexico. They met during their undergraduate years and he saw something special in her. Krisstian was unsure if it was her strong desire for success, her charisma, or her Latin beauty but he knew she had that ‘sparkle.’ When Krisstian discussed the possibility of working together and creating a music video from the ground up, including music mix, filming, cutting, and promotion, there was no doubt they wanted to go for it. This is how the music video You’re Gone started to take shape.

“I believe tremendous things happen when two creative minds collide” says Krisstian de Lara during the advertising of You’re Gone.” We both were very excited to start this new project and felt electronic music was just the right genre for the launch of Tania’s artistic career.” With regards to the theme of the song, Krisstian adds, “Love stories are many times the most complicated yet the most magical experience humans can live. That’s why we decided on the concept of how complex love can be and how impossible it is to forget.”

The concept of You’re Gone portrays two different worlds, mimicking reality and fantasy, that intertwine with each other until mashing together. The indoor studio scenes reflect Tania’s fantasy world wishing her love back while the outdoor scenes show Tania active seeking her unforgettable love. Ultimately, both worlds become an illusion where her love does not exist. This concept created an electrifying and modern product. “I enjoy creating stories that have a deeper meaning than first meets the eye. That is why we decided to mash both of these worlds into one.” Krisstian says in an interview for Univision on the night of the premiere at a local club in El Paso, Texas.

Weeks after deciding on the concept, Krisstian and Tania proceeded to go into the production. The song was recorded at The University of Texas at El Paso radio studios. Tania confesses her very first reaction after entering the dark sound studio, “I felt nervous until we recorded the first verses and listen to the results. I was able to connect myself with that person I did not know.” She continued,

To record in a studio is like to forget that the world exists and find that voice and peace where I can express myself without being judged. It’s just the microphone, the director, and me, the world doesn’t matter at that moment.
TANIA

According to Krisstian one of the biggest challenges of this project was building the sets. “Despite the fact it took us days to build, especially the handmade chandelier used in the main set, the outcome was a visual delight. The next step was to start playing with light to create the mood of the scene.” One set in particular was heavily dependent on visual effects. Krisstian visualized Tania revolving around flares of lights to create a color spectacle. To create this effect a circle of purple drapes was fabricated with a revolving camera that allowed Tania to perform in the center and the camera to gravitate around her. 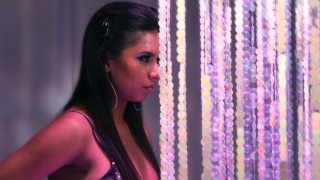 With regards to wardrobe, Tania states, “We sought an elegant and exotic look. We both searched for the best combination of different accessories, hair style and make up until we got to the best looks. I always felt comfortable because my opinion was always taken into consideration.” Tania says in an online interview through Kn2s Productions via kn2s.com after the premiere of the music video.

Tania also spoke about her collaboration with the director during the early stage of pre-production, “We got together constantly to talk about the project. Krisstian was always very responsive in every aspect. This project got us closer together as friends and I am very happy that we share the same love of the arts.”