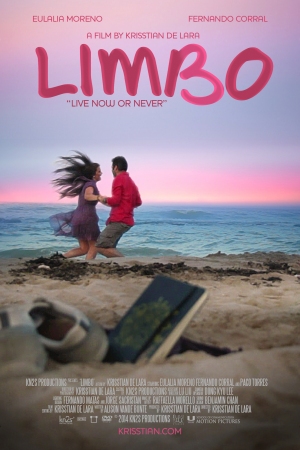 Krisstian de Lara’s film poster Limbo gets released this month. Limbo is an intriguing film about Susana who is on the verge of ending her marriage when she finds hope from a one day romance that reshapes her definition of love. When Susana is at the most vulnerable stage of her life, she encounters a stranger who gains her trust and subsequently helps her feel loved again. This journey enables her to realize what love really is and to encounter the biggest question of her marriage, is love providing for you or companionship? The poster image comes directly from the scene that captures this specific and special moment in the story.

“This image contains more than meets the eye. In the background Fernando playfully pulls Susana to the beach but in the foreground lies Susana’s diary which has the divorce letter that she is planning to give to her husband that night. Such beautiful symbolism yet so problematic and dramatic to Susana’s story.” Krisstian de Lara says in an online interview through Kn2s  Productions via kn2s.com after the launch date of the official poster. Such powerful imagery that Krisstian describes as,

Breathtaking. After watching this film the audience will connect with Susana when Fernando tells her ‘either live now or never!’ KRISSTIAN DE LARA

Krisstian de Lara would like to especially thank Ciudad de la Luz Studios and the University of Miami for the efforts and support in the creation of Limbo.