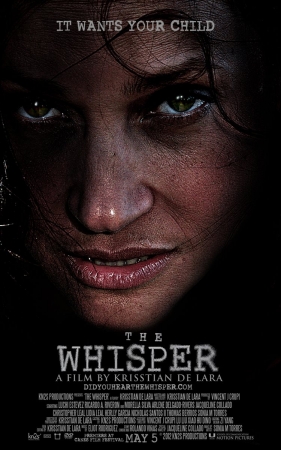 The poster for Krisstian de Lara’s horror film The Whisper launches this May. The Whisper is a lurid film about Elena’s sister and nephew who mysteriously drown in a river. She is threatened by an evil force that wants her child. It’s a horror classic Latin American tale with an unpredictable twist. Elena travels to her sister’s house after the terrible incident and finds mysterious clues that might reveal the cause of the sudden death of her sister. During her visit she starts hearing strange mumbles than turn into unrecognizable whispers. As Elena investigates further into her sister and nephew’s enigma, the closer she gets to a forceful presence who wants her child.

“This movie poster is incredibly loyal to the entire atmosphere Elena creates throughout her story. It encapsulates the feeling of fear, loneliness and of a warrior. This is why I’m enchanted by Luchi Estevez expression because it exactly portrays Elena’s fight to find the true reason of her inexplicable family member’s death. In addition, it symbolizes her fight against the curse of a house that wants to consume her during her journey.” Krisstian de Lara says in an online interview through Kn2s Productions via www.kn2s.com after the 2012 Canes Film Festival and after Estevez was nominated for Best Actress. Krisstian concludes when asked what would be the over all theme of The Whisper,

I truly enjoy playing with symbolism and carrying them over to all platforms including the movie poster itself. After watching the film you will realize that it all starts with a ‘whisper.’KRISSTIAN DE LARA