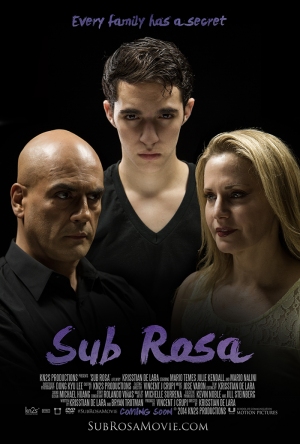 The poster for Krisstian de Lara’s film, Sub Rosa, launches this month. Sub Rosa is a provocative film about Alan, a 16 year old teenager bullied by his father to grow up, and lead to fight between the love of his step-mother over his father’s life. The film builds up over the course of a summer to a moment where Alan falls in love with his step-mother, but when his father returns in the fall, he encounters conflicting feelings. Alan strongly believes in the love that has developed between them and sees his father as an intruder to their relationship. Alan confronts the biggest question of his life, would he kill his father to stay with his step mother? Sub Rosa is a dark triangular love story depicted perfectly in this movie poster. The Sub Rosa movie poster features Mario Temes (middle) as “Alan,” Julie Kendall (right) as “Edna,” and Mario Nalini (left) as “Ernesto” with the tagline, Every family has a secret. “There is more to the poster than just the triangular imagery portrayed on it, it also carries the essence behind the entire story,” Krisstian de Lara says in an online interview through Kn2s Productions via kn2s.com during the final phase of poster design. Krisstian describes the entity of the poster as mind-blowingly powerful,

The cast expressions are even more powerful than the layout itself. It creates so much tension that it makes everyone wonder who in this family is holding the biggest secret of them all!KRISSTIAN DE LARA

The secondary posters for Sub Rosa will be releasing soon each featuring one of the three characters, Alan, Edna and Ernesto.