Director Krisstian de Lara, Producer Uriel Venegas and Story Consultant Perla Rico, speak at this year’s Plaza Classic Film Festival Q&A Session after the first ever livestream of Local Flavor I where El Chácharero, a short documentary by Krisstian de Lara, opened the program. The Q&A Session touches on various topics such as what sparked the directors to make their films, what surprised the creative team the most when creating the project, difficult aspects, maneuvering filmmaking during the COVID-19 pandemic and more. El Chácharero forms part of a trilogy of documentaries that showcase the shocking lives of three individuals from the border community of El Paso, Texas and Juarez, Mexico.

Curators, Zach Passero and Lucky McKee, kicked off the session by asking Krisstian how the film became to be, “Well, actually this is the third chapter of a trilogy of short films that showcase difficult stories of people from the border. This started me being intrigued by these kind of people who have unusual jobs and I just went out there and interview them. For the first chapter, who was El Dragón, a fire breather, the second one was a prostitute working in downtown Juarez, and this third one it’s El Chácharero, someone who picks up trash. I usually ask them the same kind of questions, and these people without knowing each other, they end up having a connection between each other. I find that they are all very honest and open about their lives. That they are not ashamed and I get to learn from them and try to document that through the film, obviously.” Krisstian finalizes by thanking the Producer of the film, Uriel Venegas, and Story Consultant, Perla Rico, for being part of making the film since it was an international effort. “It’s a beautiful portrait too” says Lucky. He adds, “A way of life, I was really moved by it, by the subject matter and the way it was made. It was a beautifully made piece.”

Zach continues with more questions, “Was there anything that surprised you? Was there anything that it didn’t go the way you thought it was going to?” Krisstian elaborates, “Yeah, you know? When living in the US, you always, or the news portrays drug as something evil and he remind me of, when he says, that drug dealers are seeking extreme poverty families to pray on them and involve them into the drug trafficking because there’s such a high demand in the US.” Krisstian highlights,

It really remind me that we never get to see the other side of the coin. We are always seen as, the US, as these angels but if it wasn’t for such a high demand maybe we wouldn’t have such extreme violence in Mexico and how big we play a role in other countries due to that.
KRISSTIAN DE LARA

Thereafter, Krisstian asks the hosts if Uriel could answer the same question but in Spanish, they agree. Uriel thanks the festival for having him and replies, “There’s many things that surprised me. The first was that Edras, who is El Chácharero, was with his granddaughter picking up trash. He goes beyond of just picking up trash but brings his family to be part of it as well. These family ties was what surprised me the most.” Krisstian adds, “This whole thing, picking up trash and teaching her how to do it, making a living out of it, creating a circle that we don’t know where it ends.” Zach comments, “That was amazing and really beautiful, simply beautiful.” Lucky adds, “The way he has, which a lot of people are very murky with their own personal moral code, about what he will do with his life and what he won’t do with this life. The fact that he took that stand is very admirable and noble person.” Then he states,

He has it a lot more tougher than most of us. It really makes you appreciate that there’s people out there that are that positive and have that attitude considering they got the world weighing down on them in that way.
LUCKY MCKEE

Krisstian then expresses how Uriel pushed him to do this story because he had doubts about making a film that could top off the other two installments of the trilogy. Also, he mentions how Perla Rico helped him remotely from Denver, while he was in El Paso, to polish the story during the post-production phase. 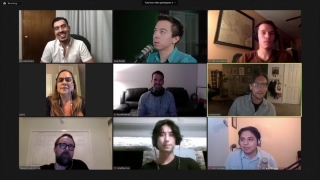 Zach continues through the session asking audience’s questions from the live chat, “What was the most challenging aspect of making your film?” Krisstian reveals, “We started this documentary with no money. So, we only had to pay ourselves if we needed to have lunch or anything.” He laughs, “But the most difficult part was filming him. Being surrounded by all these flies and all these flies being on the trash and flying on top of you and just being around him— because he was around the drainage and it was a very difficult situation because we are not used to it. We had a chance to step in his shoes and it was shocking, humbling, but most importantly, I was able to get his story out. That was completely all worth it.” Zach asks a follow up question, “Has he seen the film?” Krisstian answers with a no. He unveils that there was no way to get in contact with him and also confesses that none of the people from the trilogy he’s seen again since the day he filmed them. “Wow!” Zach responds.

When asked what was the most difficult part when polishing El Chácharero with the director, Perla analyzes, “Without a doubt it was an extraordinary experience but I also want to take into consideration that we did it through the internet and phone. I was already living here in Denver, and through the pass of time, we realize that that’s what we are doing now. Doing it through social networks and being my first time participating […] was the most difficult for me.” Perla highlights,

To be able to understand that you had this concept and how could I soak it all in. At the end, it was through an image of that sentiment that is not as real as being in person.
PERLA RICO

Krisstian extends the concept, “Everything through the same way we are doing it now, trying to communicate ourselves through screens and cameras and not have a chance to be face to face and collaborate together. […] To be able to communicate and see how fascinating technology plays a role in this.”

Lucky furthers the idea on how there’s some kind of chemistry and energy happening when you interact creatively with someone and certainly something gets lost when going online. Lucky proceed by asking how have filmmakers have dealt with the process of the pandemic and turning their environment digital. Krisstian admits, “For me, I was suppose to shoot a feature film this year during the summer and I was getting ready by March and it was exactly by March that when everything shut down. So, I’ve been on a standby, waiting to see, ‘Okay let’s do it by August.’ August is here and nothing has gotten better. So is like, ‘Okay, I think we should do the right thing because most importantly, we don’t want to put the crew and talent at risk.’ But it has really put a wrench on filmmaking. Especially independents since I depend a lot on local entities.” Krisstian continues to reveal,

Businesses, restaurants that lend me their places, that sponsor food for the crew. So, when all of this shuts down, it’s already so difficult to make an independent movie, and putting that on top of that is making it more difficult. Because literally, I needed to film in a TV studio for the film, and the TV studio technically said, ‘We are going bankrupt, we are having our own issues. Let’s put ourselves together first and then come back to us later when possible.’ And I’ve dealt with them in the past and they have always given me support.
KRISSTIAN DE LARa

Consequently, Perla also answers about the difficulties brought by the COVID-19 pandemic, “Without a doubt it has being a big impact. […] Nonetheless, at the end, every single one of us searched a way of coming out the other end and face COVID-19. I think we are one of those people, with the creation of a new platform as a journalist because at the end the majority of the TV networks sent half of their people home and broadcast from there. The live broadcast ended up being at their homes and apartments. It is painful but it has been fundamental to become stronger.” 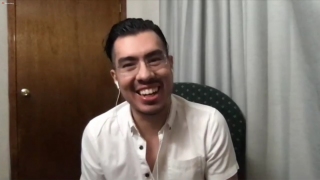 Later on during the session, Krisstian intersects another filmmaker about making films about COVID-19, “Please, don’t make any movies about us with masks and everything.” Everyone laughs, Lucky responds, “There’s going to be so many man!” Krisstian continues among laughs, “I’m over it, I don’t wanna see it on screen. […] People have told me, ‘How come you just change your script to people can wear masks and then you can shoot a film.’ And I’m like, “No, I don’t wanna see that ever again.” Zach jokes, “You can ADR (Automatic Dialogue Replacement) all the dialogue.” Krisstian chuckles, “Can you imagine?” Everyone laughs on the joke.

Lastly, Lucky asks Perla if she has any questions to the filmmakers in which she says, “I just would like to comment that hopefully you guys as directors, don’t end up doing films about actors being at home. We hope it doesn’t happen.” Everyone laughs profusely.

Zach and Lucky conclude the Q&A session by inviting everyone to vote for their favorite film and to reach out to Plaza Classic Film Fest if the audience is interested in getting in contact with filmmakers and see more of their work. Lucky summarizes that Local Flavor I was such a beautiful collection of films and that all filmmakers should be really proud of themselves, that everyone has such unique voices and cannot wait to see what they come up with next.