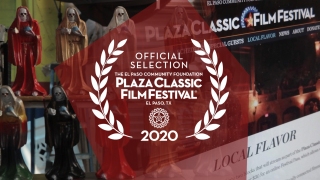 El Chácharero gets officially selected to screen at this year’s Plaza Classic Film Festival this Friday, August 7th, 2020 under the “Local Flavor” showcase. El Chácharero will open the showcase, following seven other short films that tell stories from the border community of El Paso, Texas and Juarez, Mexico, streaming for the first time, due to the pandemic over at plazaclassic.com. After the 64 minute short program, a Q&A will be featured with the filmmakers, including El Chácharero‘s Director, Krisstian de Lara, and Producer, Uriel Venegas.

The Plaza Classic Film Festival is renowned for spotlighting classic cinema since 2008 and is now in its 13th year. The Plaza Classic is the world’s largest classic film festival, averaging attendance of 40,000 people a year, and has attracted a glittering array of celebrity guests, including Al Pacino and El Paso native Debbie Reynolds. The Local Flavor has become a major showcase for regional filmmakers for independently made shorts, features, animated, and documentaries films and is generously sponsored by the Texas Film Commission. 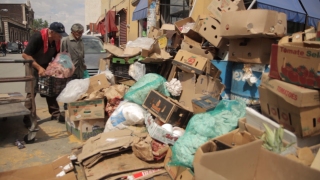 El Chácharero is the third installment from a trilogy of documentary films that showcase the most shocking lives from the border community of Ciudad Juarez, Mexico and El Paso, Texas. El Chácharero, tells the story of Edras, a man that survives by picking up trash in downtown Juarez, Mexico, with music from Floating Isle and Remy Bourgeois.

De Lara states, during an interview with Kn2s Productions, what should we expect from this third chapter,

When we began looking for a story to film I had small hopes of finding a story that could top off the other two installments […] Nonetheless, it was not until we were in downtown Juarez together with the film equipment and we were struck by luck once again.

De Lara is grateful he found this story and most importantly, have a platform for audiences to see the raw truth of what families like his are going through. To read his full interview click here.

In another interview with Kn2s Productions, the Producer speaks about the pertinence of this film to the border, Venegas states, “I believe society and the government have forgotten about people like Edras [El Chácharero].” The Story Consultant also speaks about the matter, in another interview with Kn2s Productions, Perla Rico states, “As a Juarez native, I’ve seen these stories up close and they are very gut-wrenching but at the same time they show us the self image of Juarez in several aspects. It reflects the level of education, values, and survival including how families have turned this phase into a habit.”

El Chácharero will be screening at the Plaza Classic Film Festival, under the “Local Flavor I” program:
A livestream followed by Q&A with filmmakers via Zoom conducted by curators and filmmakers Zach Passero and Lucky McKee – Friday, August 7th, 2020 at 7:00pm. Get your tickets here
View the program here | Watch the second sneak peek below or click here