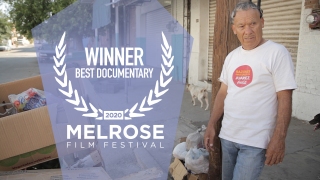 El Chácharero, the third film of a trilogy of documentaries directed by Krisstian de Lara, wins Best Documentary award at Melrose Film Festival in Orlando, Florida. This last chapter tells the story of Edras, a man that survives from picking up trash in downtown Juarez, Mexico, and its correlation between the US and Mexico border. This seven minute short film is the final installment from a trilogy of border stories that showcase the most raw and shocking lives from this complex and unique region.

Melrose Film Festival went virtual for the first time this year due to the COVID-19 pandemic and showcased 75 projects from more than 20 different countries and their official selections were hand picked from over 1,300 submissions. Not only that but El Chácharero opened the documentary category following nine other diverse films from around the world.

“El Chácharero made me see the other side of the coin that maybe we are not seeing something here in the US that is causing all these ripple effects in Mexico and to immigration and everything.” Krisstian said at the Q&A event Texas premiere of El Chácharero at El Paso Film Festival. Krisstian suggest how eye opening it is to know that drug trafficking is funding households out of poverty,

Has small as this story seems it reflects a lot about what the border is and how we are seen around the world.Krisstian de Lara

This is not the first time the trilogy receives awards, the second installment, El Flaco, a story about a male prostitute working the nocturnal street corners in downtown Juarez, also received Best Documentary Film and Best in Festival at Sun City Film Festival in Texas. Plus, the first and second installments have showcased in various territories such as Colombia, Mexico City, Baltimore, Maryland and Nashville, Tennessee. Now, Orlando, Florida joins these premiere territories with Melrose Film Festival whom they announced the winners of their categories this week at their official site here.

It comes with joy that this last chapter closes the collection as an award winning piece. The awarded Best Documentary laurel from Melrose Film Festival is now showcasing in the official trailer. Furthermore, stay on the look out of where to catch El Chácharero once again on the big screen or watch it on demand, here.