The instructional video, Confection Cuisine hosted by Fedra Muñoz, features more than just a typical recipe to make a pie, but instead highlights a family recipe whose script and design was inspired by the producer and director’s mother, Silvia Lopez de Lara. Fedra guides you through the making of a delicious Mexican dessert entitled, ‘Double Milk Devotion Pie’ made with limes, Maria cookies, condensed and evaporated milk. 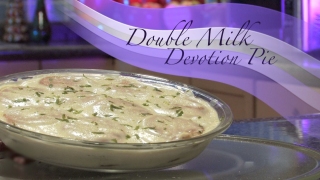 “When deciding on a recipe I wanted the simplest yet most delicious dessert,” Krisstian de Lara says a week before entering into production. “My mother and I  talked about several recipes that we could possibly feature but when she mentioned the chilled lime pie made with cookies I knew that was it. It’s a dessert than any inexperienced cook like myself could make.”

Krisstian decided to have that homemade feel and guidance just as if your mother was showing you how to make the pie, “I recorded my mother through the process of making the pie and asked her questions, as if she was the star of the show. It was very important to me to capture her essence in vocabulary and style because she makes everything sound so simple!” He laughs. “We spent such great time together during the making of ‘the making’ of the script because not only did I cherish that mom-son quality time but I was able to transfer her charm and unique dialogue to the script.”

In addition, the video was filmed Hollywood style, where only one camera is used throughout the shoot. Therefore, the entire project had to be based on a precise storyboard with detailed information regarding continuity, transitions, ingredients, framing work and visual effects. “Continuity was a big concern because we only had the exact ingredients needed to make one pie. So to be able to edit the way we storyboarded, there was no room for error. We would freeze our host in the middle of one take and continue in another in which we would change camera angles or do a close up.”

At the end of the shoot, Fedra, Ana Karla and Krisstian celebrated the successful day with a toast in the studio and by sharing the delicious signature pie. Ana Karla and Fedra took the rest of the pie home to continue the celebration while the footage went to the editing room ‘to get baked.’

“I truly enjoyed working with such professional talent. Fedra understood every aspect of production like if she had been working in the industry for years. Also, our casting director, Ana Karla’s input was exceptional and necessary for the success of this project.” Krisstian says after the online premiere of Confection Cuisine. Ana Karla describes the project as a great experience,

Krisstian has always been a professional in everything he does. Every detail, every new idea, every creation, is done with absolute passion and knowledge. He has fresh and innovative projects. His works are not about perfection, but getting real close to it.
ANA KARLA LOPEZ

“I look forward to having the opportunity to work with Ana Karla once again in the near future.” Krisstian states upon reflecting on this project, “Overall I was very satisfied with the final result. We accomplished such a good quality production worthy of being broadcast on any network, but more than that, brought a family recipe from my mom to the world.”