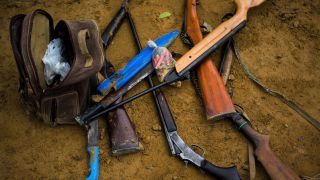 Blood, Sweat and Trees. The Story of Saweto will premiere under the stars of South Beach as part of the PAXy’s Movie Series on January 11th of 2016. The premiere will take place in an outdoor event located on Lincoln Road, one of most iconic and trendy places in Miami. Lincoln Road is a place known for modern arts and entertainment and is the epicenter of South Beach, hosting global events throughout the year.

PAXy is a non-profit organization dedicated to raising awareness of Miami’s Cultural Arts and its benefits within the community, organizing events, film screenings, art exhibitions and music performances throughout the year in South Florida.

Director, Robert Curran and writer and editor, Krisstian de Lara, will attend the premiere with the hopes of raising awareness of the continuous battle among illegal logging concessions and the indigenous people of the Amazon. The film spotlights the courageous story of Edwin Chota, Diana Rios and their indigenous community called Asheninkas.

Blood, Sweat and Trees. The Story of Saweto is a documentary about the Asheninka community of Saweto, an indigenous village in the Amazon who have been victimized by the illegal logging occurring on their ancestral property. The taking the lives of activists, including Edwin Chota, who were shot by illegal loggers last year, received international attention, creating a movement across the Amazon and all over the world.

Krisstian states during an online interview for Kn2s Productions that it is an honor to spotlight such story because deforestation in the Amazon has grown out of control. He concludes,

Indigenous villagers only want to save their trees, their land, their way of life and for all of this to be at the mercy of loggers with weapons, then it is time to take action.
KRISSTIAN DE LARA

Blood, Sweat and Trees. The Story of Saweto will be premiering on:
January 11th, 7PM, at 1111 Lincoln Rd. Parking, preceding the feature length film, Blue Velvet.
Presented by PAXy Organization.
Complimentary Wine and Cocktails by Angelvin and Tanduay Rum.
The event is free and open to everyone.

Are we there yet?📍 #krisstiandelara #director

You coming or nah? 🚲🫧🖤 #krisstiandelara