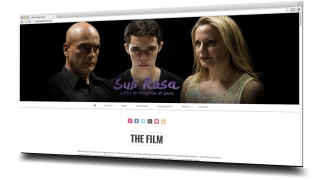 The most rewarding part of making a short film is when actors and crew come together to make visual and emotional artwork and, most importantly, everyone using their talent to bring alive a story that previously could only have existed in your mind. There are many aspects essential to the success of a film, from seeking investors, raising funds, preparation before principal photography, maximizing actor’s performance, achieving the desired mood and feel created by camera angles and lighting, incorporating the crew’s input, to the final input after editing, sound mix and color correction.

This is why I am very stoked to announce that the official website for Sub Rosa launches this month featuring many of the talented cast, crew and investors behind this project. The official site, SubRosaMovie.com will be a platform to showcase the project, behind the scenes, its festival run and all the people who poured their hearts and souls into this film. For example, highlighting the thoughts of our cast, Mario Temes as Alan, Julie Kendall as Edna and Mario Nalini as Ernesto, throughout the filming process. I will be revealing insights and challenges faced while on and off set. In addition, I will showcase talented crew such as producer, Vincent J. Crupi, director of photography, Dong Kyu Lee and make-up artist, Michelle Surrena, just to name a few, that helped make the film to what it is now. The site will also include wallpaper downloads for all device types, plus, an interactive section where anyone would be able to anonymously submit any kind of secrets and publish their story on the site.

This site will represent a celebration of hard work and this is why I am so excited to share it with the world.
KRISSTIAN DE LARA

I believe all audiences can relate to Sub Rosa and it will be a film that inspires discussion after you see it. You may ask, could real life people be as complicated as the characters portrayed in this film? I believe so. This film visits many corners of human natural interactions and true intentions and after you see it you may understand the power of filmmaking.

I would like to thank the crew, the investors and everyone who as helped through the process of making this film. I would also like to give special thanks to our executive producers, Kevin Noble and Jill Steinberg for making this project possible and helping Sub Rosa reach its highest potential.

Sub Rosa is a coming-of-age story of a male teenager who has grown up under the shadow of his authoritative father. Over the course of a single summer, events transpire which transform this boy into an adult who challenges his dad in very unorthodox ways.