Film writer and director, Krisstian de Lara, presents the documentary, Blood, Sweat and Trees, The Story of Saweto, at the Putting Art in the Galaxy (aka PAXy) Movie Series Event featuring David Lynch films. The film premiered on January 11th, 2016 at the 1111 Lincoln Road Parking in one of most iconic and trendy places in South Florida. Lincoln Road is a place known for modern arts and entertainment and is the epicenter of South Beach, hosting global events throughout the year. 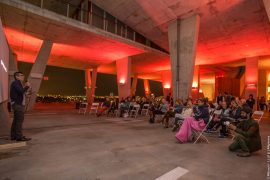 PAXy is a non-profit organization dedicated to raising awareness of Miami’s Cultural Arts and its benefits within the community, organizing events, film screenings, art exhibitions and music performances throughout the year in South Florida.

Krisstian shared his thoughts on how he got involved with the project as a writer and editor along with the efforts to create a great piece. Krisstian also expressed how important it is to combat climate change by creating personal changes and inspiring our communities to do the same. Before Krisstian introduced the director of the documentary, Robert Curran, he mentioned the world premiere that occurred 4 weeks ago in Paris and Lyon, France. He concluded,

Yes, it all starts with wanting to help someone and the universe will follow.
KRISSTIAN DE LARA

Blood, Sweat and Trees, The Story of Saweto is a documentary about the Asheninka community of Saweto, an indigenous village in the Amazon who have been victimized by the illegal logging occurring on their ancestral property. The killing of several activists, including Edwin Chota, who were shot by illegal loggers last year, received international attention, creating a movement across the Amazon and all over the world.

To read more about the Paris and Lyon, France premiere click here. Also, Blood, Sweat and Trees, The Story of Saweto is now available to watch online for free, click here.