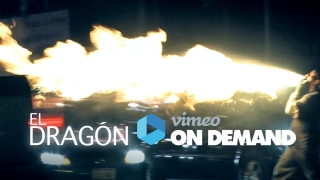 The documentary short film, El Dragón, directed by Krisstian de Lara, hits the video platform Vimeo On Demand this month for a limited time. El Dragón tells the story of Jorge, a fire breather making a living working on the dangerous streets of Ciudad Juarez, Mexico. Krisstian speaks about how lucky it was to find a story like Jorge’s and be able to film it on that particular day in the Official El Dragón interview, watch the full interview here.

El Dragón has premiered at various film festivals including Plaza Classic and El Paso Film Festival but it will be the first time to become available on the Vimeo renting platform. The digital Video on Demand platform reaches a total of 100 million viewers each month across the globe. The rental comes with a 48 hour streaming period to watch on your phone, tablet, computer or TV and can be purchased using any credit or debit card and even Paypal.

Watch the trailer and film below or click here to watch it on Vimeo On Demand.

More about El Dragón: Director speaks about the spirit of Juarenses in El Dragón’s movie poster

Getting there... 🥵⁣ ⁣ #krisstiandelara #gym

Thank you to all scientists for not giving up 💉