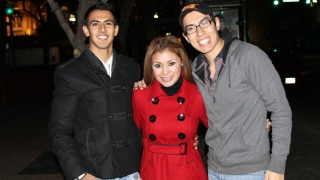 A Behind the Scenes photo of Wishing Star with (left to right) Alberto Lujan, Martah Alondra Lozano and producer and director, Krisstian de Lara

Many times during the holidays you might find yourself alone but if you just wish upon a star you will realize in fact that you are not. That is how the idea of Wishing Star was born. A promotional for Kn2s Productions dedicated to all of their clients, family and friends with a special holiday message. The approach behind this project was to inspire anyone to dream and wish for their most desired goals and ambitions.

The primarily message of Wishing Star is to show that if you find yourself away from home or away from someone special during the holidays, you should not feel alone. The distance or their physical presence of that special someone is not necessary. There is always someone out there who loves or cares for you; these people might even be your friends!

Wishing Star also emphasis that if you find your goals or dreams hard to reach do not give up on them because they might be right around the corner. Which is exactly what this young lady dreams of; spending this festive season with her loved one. A beautiful message to share with your husband, girlfriend, or who is far away or even with someone who feels their dreams have not yet been fulfilled.

Wishing Star was filmed in three days with the incredible cast of Martah Alondra Lozano and Alberto Lujan. A cast that Krisstian de Lara, producer and director of this project, put together because he saw them as a dynamic and charming duo. The project was also photograph following a very precise storyboard. Where shots and camera movement were carefully calculated and beautifully synchronized in the editing room.

“Working with Alondra has been a pleasure,” Krisstian de Lara says the last day of shooting. Lozano has also hosted several television shows locally in El Paso, Texas and through television networking Krisstian and Alondra meet. “I appreciate her professionalism, one of her family member passed away during production and she was able to manage herself and be on set the following day. A professional woman dedicated to her responsibilities and the project itself, something I really admire” Krisstian de Lara said during the post-production phase of the project.

“The Christmas atmosphere was distilled with Krisstian’s creativity with his project in which I had the opportunity to be part of. It was an exciting experience for me which personally put me into the festive mood despite of a recent death in my family.” Martah says in an online interview through Kn2s Productions via kn2s.com after the premiere of the promo. She continued,

I think if I had to describe the director in one word, it would be determination. Since I have known him, Krisstian has shown to be “ahead of the curve” like people would say. His determination, dedication and imagination sets him apart and is fair to say that excellence is evident in his work.
Martha Alondra lozano

Alberto Lujan who plays the lover in Wishing Star has a modeling career and debuts for the first time in film, “I am pretty proud to be part of this project. Especially having the opportunity of working with one of the best producers I ever have meet, Krisstian” Alberto Lujan says on an online interview through Kn2s Productions via kn2s.com. 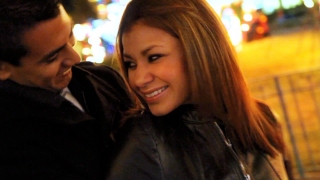 Alberto also speaks on how it was to collaborate with the director, “Krisstian is a very talented young man with a spectacular vision. He has many perspectives of completing the project making it quick and very fun. Krisstian knows how to reinvent himself and succeed at it. Working with him was extremely easy with no problems of any kind.” Alondra adds, “I really enjoyed seen the idea realized. These set of ideas conceiving together in film is something that takes a lot of energy; and I believe that energy infects us during the production and I believe overall it was… super cool!” she says giggling.