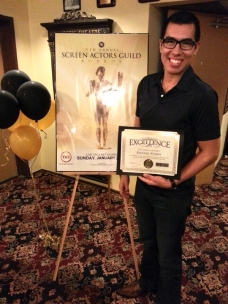 Producer and Director, Krisstian de Lara, receives Screen Actors Guild (SAG) Award recognition for his commitment and outstanding work during the production of the SAG-AFTRA Student Film Sub Rosa. South Florida SAG-AFTRA Union had an event the beginning of the year to celebrate their 19th annual awards know as, Screen Actors Guild Award where actors and actresses who form part of this union receive recognition for they great efforts, skills and performances in fine arts in films and television such as feature films and television series.

The introduction of the recognition began by mentioning the great relationship SAG-AFTRA Union has with the University of Miami. The collaboration and efforts of creating films with heart felt performances. Hence, SAG-AFTRA Union wanted to recognized a great University of Miami student filmmaker for his extensive work on casting through SAG and find the best actors for his upcoming film, Sub Rosa. Krisstian stands in front of the microphone, “I was really not expecting this at all!” He continues, “It is truly an honor to work with such talented people here in South Florida. In fact, I collaborated with a colleague of mine last year on a project that won the Diamond Award from the California Film Awards today and the lead actress is a SAG member. This only means one thing, talent is crucial to any film!” Krisstian concludes,

I am thrilled to have collaborated with SAG actors on many of my projects and have the chance to work together to tell the best stories possible. I look forward to working with SAG actors and actresses once again on this new project I am about to submerge into, Sub Rosa. Thank you!KRISSTIAN DE LARA

Krisstian de Lara would like to thank Linda Isrel, SAG-AFTRA Associate Business Representative for helping in the extensive casting work of many of his films, including, The Whisper. “I’m so thankful to work with Linda because she is always willing to go that extra mile, even helping with last minute casting calls. My projects would not have been successful without her efforts.” Krisstian says in an online interview through Kn2s Productions via kn2s.com after the SAG Awards Ceremony.

In addition, Sub Rosa gets fully funded thanks to your generous support! Read more about it here.

Life is so beautifully intricate... that it's okay

Wow! 😲 We hit half a million organic views on t