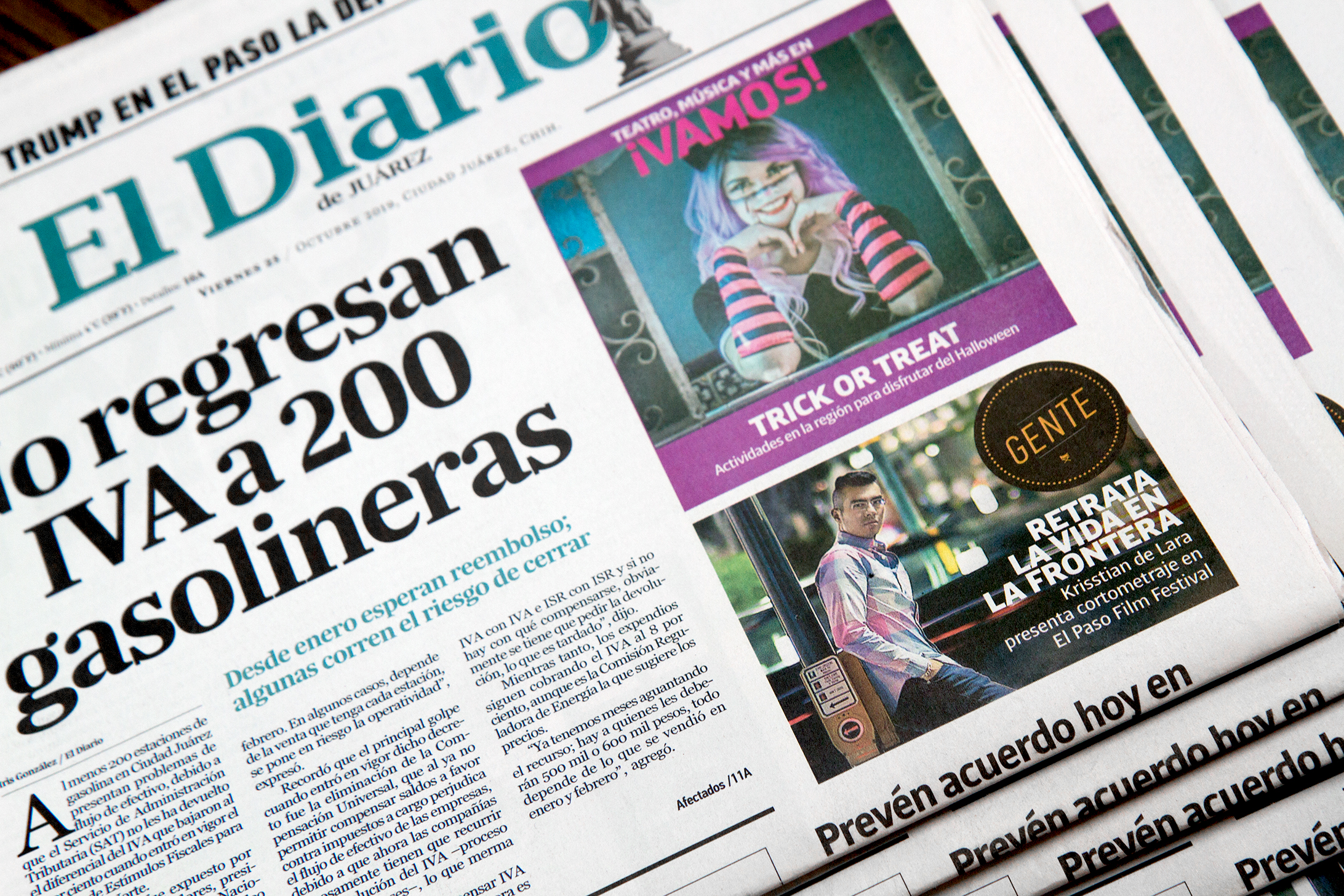 Director Krisstian de Lara gets featured on the front page of the newspaper El Diario de Juárez with his interview for the premiere of his documentary short film, El Chácharero. El Chácharero is the third chapter from a trilogy of documentaries that showcase the most shocking lives from the border community. This third film tells the story of a man that survives by picking up trash in downtown Juarez, Mexico, and its correlation between the US and Mexico border. The article highlights Krisstian’s early beginnings in the entertainment industry, his previous documentaries and purpose of making such films.

The story was written by correspondent María Martínez who interviewed Krisstian profoundly for the Friday, October 25th edition of the newspaper’s section “Gente” (Entertainment.) The half page spread article titled, “Retrata la vida en la frontera” (Photographs life on the border) kicks off stating Krisstian, a border native, sees cinema as an open window that brings the opportunity to create awareness about the quality of human life. Furthermore, it has allowed him to tell impactful stories about Ciudad Juarez through this medium.

The article continues to explain the most recent proof of telling such stories is Krisstian’s latest short film, El Chácharero, premiering Saturday, October 26th at El Paso Film Festival. This film forms part of a trilogy composed of other shorts, El Dragón and El Flaco, stories about low-income individuals that “‘despite the difficulties they face'” they make a living in Juarez. Krisstian adds,

I enjoy any kind of filmmaking but I’ve been interested to tell stories that happen in the border because it’s a place where I identify myself with, where I grew up in and where my parents currently live and what better to give back to the community that has given me so much.

Krisstian reiterates, “I want to showcase the other side of the border, that these people exist despite difficulties and vulnerability of crime groups, they always manage to earn a living with their hard work.” The article informs that Krisstian was born in El Paso, Texas on October 8th of 1988 but lived in Juarez and studied elementary school at Abraham Gonzalez until fourth grade. In which at that time, his parents believed it was time for him to learn English and continued his education in El Paso, Texas.

The piece then describes Krisstian’s interest of cinema beginning at the age of 13, while he worked for XHIJ Canal 44 in which he created his first documentary short about the murder of Airis Estrella, an event that shocked the entire city of Ciudad Juarez. From that point on, Krisstian decided to accomplish a bachelors degree at The University of Texas at El Paso in Communication Studies and later a masters degree at the University of Miami in Motion Pictures Production. At 31, he has directed various documentary shorts in which his trilogy and a dramatic feature film with a duration of 90 minutes are a stand out. Additionally, he was an assistant to various international commercials for Walt Disney in 2013. 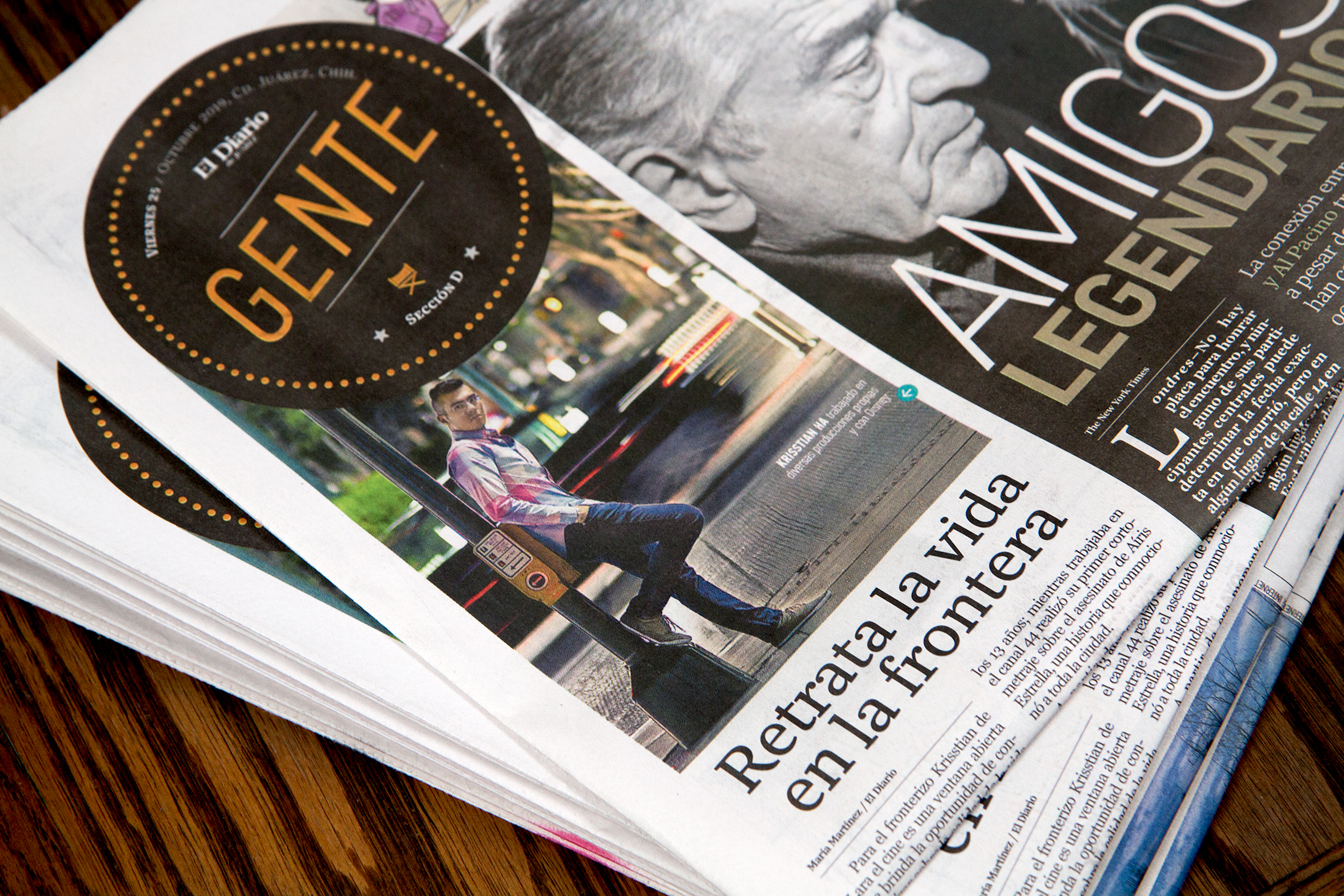 The article then dedicates a section focused on El Chácharero and its technical details. “El Chácharero is a low income man who is between a rock and a hard place due to the situation he lives in which places him inevitably as a victim of crimes and drugs. According to what he narrated, they have indeed offered him a job but resists. It’s a short film about how he sees life.” Krisstian concludes.

The story ends by indicating the film’s 5 minute duration, a lapse of 8 months in its creation, a few more for its editing process, and the premiere date of October 26th at 2:30pm in El Paso Museum of Art at El Paso Film Festival.